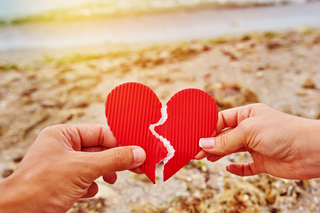 5 Tips For Couples Who Have Decided To Separate

1. Remember that your partner might not be on the same page as you.

You may have decided that you want to separate a long time ago but that's not necessarily the case for your partner. Whereas you may have had time to come to terms with separating and all the resulting emotions - the sadness, hurt and anger, if your partner is unaware of the impending separation, they will not have had the time to process the situation. Try and be aware that they will need time to deal with the prospect of a split in the same way you did.

So take a breath and slow down: try and give your partner the time and space to work through all the emotional stages of a separation before wading in with your practical, logical and reasonable suggestions for arrangements in relation to the split. If you expect reasoned responses from your partner while they are still coming to terms with this difficult news, you will be disappointed. Forcing a partner who is still hurt or angry will not end well and could easily result in acrimony.

2. What is said and what is actually meant are not necessarily the same

These types of statements will often inflame an already difficult situation and might well be perceived as a declaration of war. This takes you into an adversarial process which is very difficult to get out of, even after you have grown tired of the fight. There are of course plenty of divorce solicitors who will gladly take up the fight for you - at £200 plus per hour they will be delighted to assist!

Warring couples can end up leaving permanent scars on everyone, including the children. So try and understand your partner's perspective. Yes, this is very often difficult to do, but if you can, you just might be able to avoid the legal battlefield.

3. Don't think that separating from your partner will magically change them or the way they do things

Behaviours and personalities don't change just because you've separated. A partner who was prone to being late when you were together, is unlikely to bring the kids home on time after a visit. A partner who was a procrastinator isn't all of a sudden going to become efficient and decisive when responding to your suggestions or offers of settlement.

Separating couples often have unrealistic expectations of their partners. The sooner you accept that your partner won't change their behaviours, the easier the process will be for you. If you couldn't get them to understand your perspective or behave in a certain way when you were together, why would you think things would be any different after separation?

4. Don't make the mistake of thinking that a court will see things your way

If you do end up asking the court to make decisions about your kids, finances or property, there is very little chance that either of you will be happy with the outcome. Some couples become so entrenched in their positions that they become consumed with the desire to be heard. They feel that if they can just have their say in front of a Judge, he is bound to agree with them and give them what they want.

In reality, the court will look at your situation with an objective, unbiased view and will make a decision based on the law, accepted practices and procedures. Your 'day in court' is likely to turn into many days in court costing many thousands of pounds while doing untold damage to your finances, personal well-being and the well-being of your children.

Courts are not the correct forum for either of you to vent your anger, frustrations and devastation. Courts should only be used as an absolutely last resort if you and your ex just cannot come to an agreement either between yourselves or with the help of a mediator.

5. Never make the mistake of thinking your children don't know what's going on

Whatever their age, do not underestimate the impact that separation and divorce will have on your children. You may think you are keeping the hostility and tension away from the children but you can bet your bottom dollar that they will know something is wrong. It is really important that they feel they can talk to you and that you will be honest with them.

Children that don't know what is going on in their world will often feel insecure and fearful. Their imaginations may well run wild and if you and your partner are not talking to them and giving them the reassurances they need, you may well have to deal with some unexpected reactions and behaviours.