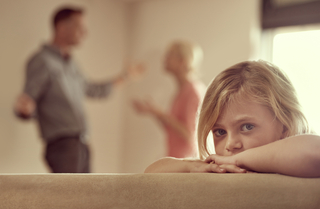 A real life example of why you must try mediation.

Jack and Jill were a couple: they were young, inexperienced and naïve, yet despite the difficulties and challenges in their relationship, they were doing pretty well - Jack had a good job, Jill was attending college and working part time, they had a lovely 2 bedroom house, a car and enough disposable income to allow them to socialize now and again. Everything was good.

Then Jill fell pregnant. Suspicions arose as to whether this was an accident as Jill had stated, or was in fact, a deliberate move to tie Jack down? In any event, a decision was made not to continue with the pregnancy and the necessary arrangements were made.

On the day of the appointment, Jill could not go through with the termination and she and Jack decided to continue with the pregnancy.

Baby Jane was born a delightful and healthy baby. Jack and Jill did incredibly well in dealing with this newborn bundle. All her physical needs were being met and any initial worries about Jill being able to bond with the baby soon evaporated. Jack struggled to bond at first but worked hard to explore his feelings and talk about how he felt.

And so the story continued for the first two years of Jane's life - until things started to unravel......

Jack and Jill started arguing more and more. Resentments, jealousies and irritations started to rear their ugly heads and the couple became less and less able to control their anger and frustration with each other. They began arguing in front of Jane and on occasion, would get physical. Pushing and shoving turned into slapping, then punching, then grabbing around the throat ... sometimes in front of the baby.

Despite numerous attempts to repair and improve relations, Jack and Jill parted ways. Jack moved back to his mother's house and Jill stayed with Jane in the family home.

It quickly became apparent that Jill was not coping: she could not come to terms with losing Jack and all her attention started to centre on him rather than baby Jane. She was overwhelmed with the situation in which she found herself and could not deal with the prospect of being a single mum. Her behaviour started to deteriorate and solace was found with unsuitable types, alcohol and drugs.

Jack became increasingly concerned about Jill's behaviour and the impact it would have on Jane. Following the input of a mutual family friend, the suggestion was made that Jane live with Jill's mum who had a house just across the road from Jill. Jack would be able to visit Jane frequently and would contribute financially towards her living costs. It was made very clear to Jack and Jill that if they failed to agree on issues, matters would eventually be taken out of their hands, social services would get involved and eventually the courts would be making all the decisions regarding Jane. Jack realised he was in no position to have Jane full time as he was out at work all day and he agreed to the arrangement, as did Jill.

This arrangement worked well for many months. Although Jill's behaviour was still problematic and causing worry, the baby was happy, settled and developing nicely. Jack was sticking to the arrangement and Jane's grandmother was extremely accommodating in facilitating Jack's access to the baby.

Until...... out of the blue and with no warning at all, the whole situation imploded.

Jack decided that, following his arranged contact with Jane, he was going to keep her. He refused to listen to any reason or argument from any quarter and caused enormous worry and stress for Jill, her mother and undoubtedly Jane. The baby had never spent more than a few hours with Jack and had never stayed overnight. She had been used to seeing her mum and granny every day since she was born and now found herself in a new and unfamiliar environment.

Jack was begged to reconsider his position and engage in mediation: he point blank refused.

There followed many altercations in the street, unpleasant calls and texts with every Tom, Dick and Harry putting in their two-penneth - but nothing changed. Jack and Jill continued to lose sight of what was important in their conflict and everyone suffered as a consequence.

Inevitably, Grandmother decided that legal advice was needed and called a solicitor. He explained that no legal aid was available for either her or Jill and that any applications to the court to get Jane back, would have to be made by either her or Jill themselves. This was a very scary prospect for both of them as they had neither the money or capability to deal with issuing court proceedings with no assistance.

Luckily, Jill knew someone who knew their way around the court process and asked for help. She managed to borrow the £200 needed just to pay the court filing fee and then submitted the application to the Family Court, asking for Jane to be returned to Grandmother immediately.

After many hours of waiting around the court, a Judge agreed to deal with the application. Jane's grandmother had to speak to the Judge on her own and no one was allowed to go in with her. Despite being petrified beyond words, she went through with it and the application was granted. The Judge said that Jane had to be returned immediately and that he wanted to see Jack, Jill and Grandmother in 2 weeks' time in order to speak to them all together.

The baby then had to be retrieved from Jack and returned to Grandmother: it did not go well.

Jack of course, knew nothing of this court order until the police turned up at the door to remove Jane. Friends and family rallied around him and caused great distress to everyone involved, most especially baby Jane. After several hours of heated dispute, Jack finally conceded that he would have no option than to hand Jane over to the police, which he reluctantly did.

At the next two court hearings that followed, Jack instructed a barrister to act on his behalf which meant he had to dip into his meagre savings. Neither Jill nor Grandmother could afford to be represented and so had to speak for themselves at court.

Unsurprisingly, Jack's barrister had the upper hand: he knew his way around the court process and all its vagaries while Jill and her mother struggled to cope. Their nerves overcame them and they found it difficult to convey their thoughts and position. Jill found it almost impossible not to challenge the assertions being made by Jack's barrister and was reprimanded by the Judge for her inappropriate outbursts.

The Judge ordered reports to be done on all parties before he would make a decision on Jane's future. With that information, he would decide where Jane would live, what the access arrangements would be etc...

It is now several months on and Jack and Jill are still waiting for the court to make a decision on Jane's future. It is likely that it will be several more months before that decision is actually reached and implemented. The relationship has completely broken down between Jack and Jill and becomes increasingly acrimonious. Grandmother is finding it difficult to deal with the stress as well as ensure that Jane is well cared for. Jack has ceased any financial assistance and Jane also has nothing to contribute, so Grandmother bears the full financial burden of Jane's needs.

The situation is painful, stressful and worrying. All parties are on tenterhooks wondering what decisions the court will make and how they will impact on their lives. No one feels they can move on or engage in their own lives with this hanging over their heads.

The tragedy of this situation is that it was totally avoidable.

Jack and Jill are consumed with regret that they let matters get out of hand and end up in the courts. They realise now that had they turned to mediation at the outset, issues could have been discussed and resolutions reached that everyone could live with: instead they are in the painful situation of waiting for total strangers to make really important decisions regarding their child.

It would seem that many people are still not aware of what mediation is, how effective it can be or that in many civil disputes, it is now a requirement that it has been tried before parties take matters to the courts.

Well, people now need to be made aware.

They need to be aware because if not, they too will sleepwalk into a legal process that will be costly, stressful and often agonising. Parents must understand that when relationships breakdown, their overriding objective must be to protect the children and the way to do that is to resolve matters around residence, access and finances before they get out of hand.

Mediation is the way to do that.

(Names have been changed to protect identities)